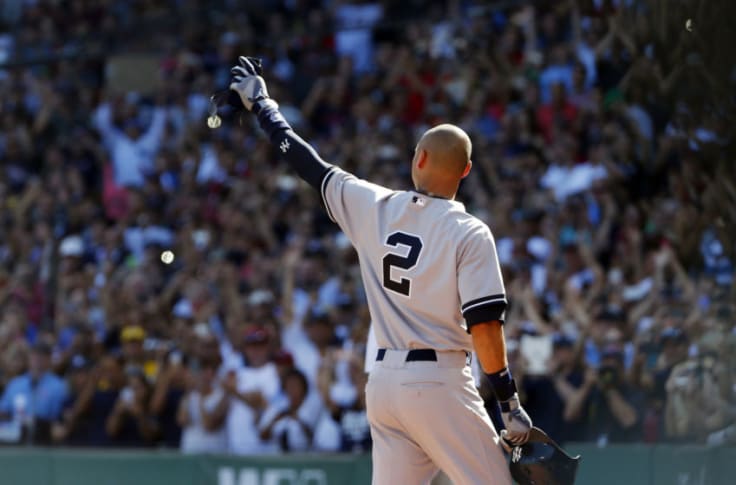 Almost seven years since Derek Jeter played his last game at Yankee Stadium, he gets what his 20 year career earned him; a spot in the Hall of Fame in Cooperstown, NY.

The five-time World Series Champion, 14x All-Star and 5x Gold Glove winner, Derek Jeter will have his most anticipated moment of his career almost a year later.

“Mr. November” or The Captain, as he is also well known as, will be entering the Hall of Fame alongside Larry Walker, Ted Simmons and Marvin Miller on Wednesday, September 8 in Cooperstown. Jeter was elected one shy of a unanimous vote, receiving 99.7% of the BBWAA votes. It really makes you wonder who that one person is who didn’t vote for Jeter.

Entering the Hall of Fame, Jeter is one of only nine inductees to enter playing their whole career in pinstripes. Ever since he was a kid, Derek dreamed of playing shortstop for the Yankees and wearing number two. Well, Jeter did exactly that and spent a long 20 years following his dream, and that dream has brought him to the Hall of Fame.

On spending his career in the Bronx, “It probably means a little bit more to me than maybe some other people, because I grew up a Yankee fan… It’s the only organization I ever wanted to play for. I was fortunate to play 20 years in New York, parts of 23 professionally, and a lot of thanks goes out to the Steinbrenner family — especially The Boss [George M. Steinbrenner]. He was big on, ‘If you guys win, we’ll bring you back.’”, Jeter said.

Representing the Yankees in the Hall of Fame is also a milestone as he will be the 21st in the Hall to do so. He is also the 57th player, manager or executive to be inducted after spending their entire or part of their careers with the Yankees.

Most of Jeter’s most remembered moments came throughout different parts of his career.

From the Yankees Beat reporter, Bryan Hoch and MLB.Com, these are their top 10 moments of Jeter’s career:

1.) The kid can play (April 2, 1996 at Indians)
As the 1996 season dawned, George Steinbrenner was not sure his starting shortstop belonged in the Majors, even pushing his baseball people to swap Mariano Rivera to the Mariners for veteran Felix Fermin. They wisely resisted, and Jeter began to win over The Boss with a strong Opening Day performance that featured a nifty over-the-shoulder grab and his first big league homer, a blast off Cleveland’s Dennis Martinez.

2.) Angel in the outfield (Oct. 9, 1996 vs. Orioles)
Jeter’s biggest home run of his American League Rookie of the Year Award-winning campaign came with some assistance in Game 1 of the 1996 AL Championship Series, as 12-year-old fan Jeffrey Maier prevented Baltimore outfielder Tony Tarasco from grabbing Jeter’s eighth-inning drive off Armando Benitez. Despite Tarasco’s immediate objection, umpire Richie Garcia ruled it a home run. The Yankees won, 5-4, in 11 innings, and went on to win the ALCS in five games.

3.) Midsummer MVP (July 11, 2000 vs. National League)
Jeter was selected to 14 All-Star Games during his career, and his finest performance came in the 2000 Midsummer Classic at Atlanta’s Turner Field, having been elected as the AL’s starting shortstop for the first time. Jeter finished the game 3-for-3 with a double and two RBIs, leading the AL to a 6-3 victory.

4.) Subway star (Oct. 25, 2000 at Mets)
The Mets showed signs of life as the Subway Series shifted venues to Shea Stadium, securing a 4-2 victory over the Yankees in Game 3 of the World Series. It took all of one pitch for Jeter to reverse the momentum, blasting Bobby Jones’ first pitch of Game 4 over the left-field wall. The Yankees won the game, 3-2, and Jeter finished the World Series batting .409 with two homers and six runs scored to earn MVP honors.

5.) The Flip Play (Oct. 13, 2001 vs. Athletics)
Jeter always seemed to be in the right place at the right time, but never more than in Game 3 of the AL Division Series against the A’s. With the Yankees clinging to a 1-0 lead, Terrence Long smacked a Mike Mussina pitch down the right-field line. Shane Spencer fielded the ball, then wildly overthrew both cutoff men. Jeter appeared near the first-base foul line, shoveling the ball to catcher Jorge Posada. Oakland’s Jeremy Giambi did not slide, and he was tagged out.

6.) Mr. November (Oct. 31-Nov. 1, 2001 vs. D-backs)
With the World Series pushed back a week by the tragic events of Sept. 11, Game 4 inched past midnight into November, having been tied by Tino Martinez’s two-run ninth-inning homer off closer Byung-Hyun Kim. Jeter ended the contest with an opposite-field blast that tied the Fall Classic at two games apiece. As Jeter rounded the bases, a well-prepared fan hoisted a sign that proclaimed him “Mr. November.”

7.) The Dive (July 1, 2004 vs. Red Sox)
The rivalry between the Red Sox and Yankees was arguably never more intense than during this period, when Jeter chased a ball into the field-level seats at Yankee Stadium and emerged with his face bloodied. The play occurred in the 12th inning with the game tied, 4-4, as Jeter flagged a Trot Nixon flare that could have dropped for a two-run single. Instead, Jeter saved the day and John Flaherty ended the game with a single in the 13th.

8.) Passing the Iron Horse (Sept. 11, 2009 vs. Orioles)
With 2,721 hits, Lou Gehrig had stood as the Yankees’ all-time hit leader for more than 70 years. Jeter surpassed the Hall of Famer on a drizzly evening in The Bronx, smacking a single to right field off Chris Tillman for career hit 2,722. Play halted in New York’s eventual 10-4 loss as Jeter’s teammates emerged from the dugout to celebrate the accomplishment.

9.) Mr. 3,000 (July 9, 2011 vs. Rays)
Before Jeter stepped into the batter’s box on this day, Wade Boggs had been the only player in history to homer for his 3,000th hit. That changed as Jeter pounded a hanging breaking ball into the left-field bleachers, becoming the 28th player in history — and first Yankee — to reach 3,000 hits. Jeter finished the day 5-for-5, including a game-winning hit in the eighth inning.

10.) Farewell to The Bronx (Sept. 25, 2014 vs. Orioles)
Playing his final game in pinstripes, Jeter laced a game-winning hit off Baltimore’s Evan Meek, slashing his trademark inside-out single to right field as Antoan Richardson raced home with the deciding run in New York’s 6-5 victory. The moment was bittersweet for Jeter, as the Yankees had already been eliminated from playoff contention. It marked his only walk-off hit at the current Yankee Stadium.