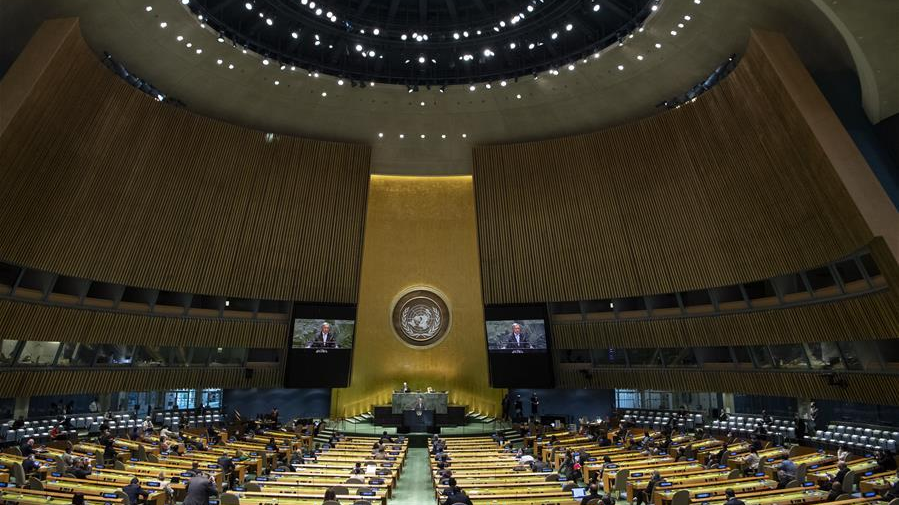 What goes through your mind as you spin a globe? Perhaps you’re bored, or maybe you just like watching the different countries and regions spin around as your eyes try to focus on certain ones. Regardless of whatever you feel, you can still see the vast size of the world; there are so many different countries with different cultures, socioeconomic policies, and viewpoints. It makes one wonder, how could we all possibly unite if the ways of our lives are so different? The formation of the United Nations in 1945 proved to be the solution to this problem; quite recently, the 76th annual meeting of the United Nations occurred, otherwise known as the United Nations General Assembly. And as the world is more tense than it’s been for a long time, the input of world leaders from various countries is more important than ever before.

Everything Happening in America Right Now

To start off, the United States and Egypt met to discuss regional issues: relations, human rights, and funding. The Secretary of State (Anthony Blinken) met with Egypt’s foreign minister about Cairo’s ties to Washington as well. The mobility of the U.S moves forward as the hours pass; the U.S announced 180 million dollars in aid for Rohingya refugees from Myanmar’s Rakhine State, the United States is giving $247m in humanitarian aid and $89m in economic and development aid to Venezuelans, President Joseph Biden and French President Macron spoke on the phone for about a half an hour concerning a submarine deal in Australia, and the U.S promised an additional 290 million dollars in federal aid for Yemen, stating that their ultimate solution was to “end the war.”

The conversations and focuses of the General Assembly seemingly took turns based on what country was being represented; it is abundantly clear that while living in the same world, we are living in very different ones. In Bosnia, the issue of Climate Change isn’t yet decimated, Zeljiko Komsic (the chair of Bosnia and Herzegovina’s tripartite presidency) stating that, “it will cost even more if we do not take the need to accelerate climate change mitigation activities seriously.” Venezuela is currently fighting against long lasting Imperialism and colonialism, the President Nicholas Maduro stating that, “It must be liberated from any hegemonies or any empires’ attempts at economic, financial, military or political domination; liberated from those who over centuries plundered, dominated, exploited and oppressed people throughout the world with their old, rapacious colonialism. There are those who are today attempting to impose new forms of colonialism on our people, new forms of domination, looting, oppression and exploitation of people throughout the world; that is why in this general assembly… Venezuela is calling for a new world free from colonialism, a new world without imperialism, a new world without any dominant hegemony.¨ Italy plans to give other countries 45 million doses of COVID-19 vaccines before the end of the year, three times its original pledge, Prime Minister Mario Draghi has said. The country of Turkey is having its own internal and external issues regarding immigration; the Turkish government believes the United States isn’t doing enough to help Afghans. Turkish President Recep Tayyip explained that ¨Right now, the US is failing to meet its obligations. We have more than 300,000 Afghan refugees and we will no longer be able to afford to welcome any more Afghan refugees in Turkey.¨ Germany has voiced opposition to the Taliban’s request to address the UNGA, saying the “show” by Afghanistan’s new rulers would serve no purpose. “To schedule a show at the United Nations won’t serve anything. What’s important are concrete deeds and not just words, including on human rights and in particular, the rights of women and on an inclusive government and distancing from terrorist groups.” German Foreign Minister Heiko Maas told reporters.

Spain will donate 7.5 million doses of COVID-19 vaccine to Latin America and the Caribbean and a further 7.5 million to sub-Saharan Africa and Southern Europe, Prime Minister Pedro Sanchez has said. The United States is scheduled to release news that it will double its purchase of Pfizer’s COVID-19 vaccine to send 1.1 billion doses to other countries. The commitment will increase doses purchased by the US for global distribution by 500 million through 2022, two senior Biden administration officials said, hours before Biden is set to host a virtual vaccine summit on Wednesday on the sidelines of the UNGA. Brazil’s Health Minister Marcelo Queiroga has tested positive for COVID-19 after attending the UNGA, where Brazilian President Jair Bolsonaro was the first world leader to speak on Tuesday. Queiroga, who had received a COVID-19 vaccine, was the second member of Bolsonaro’s entourage to test positive for the virus since arriving in New York, the Brazilian government said in a statement.