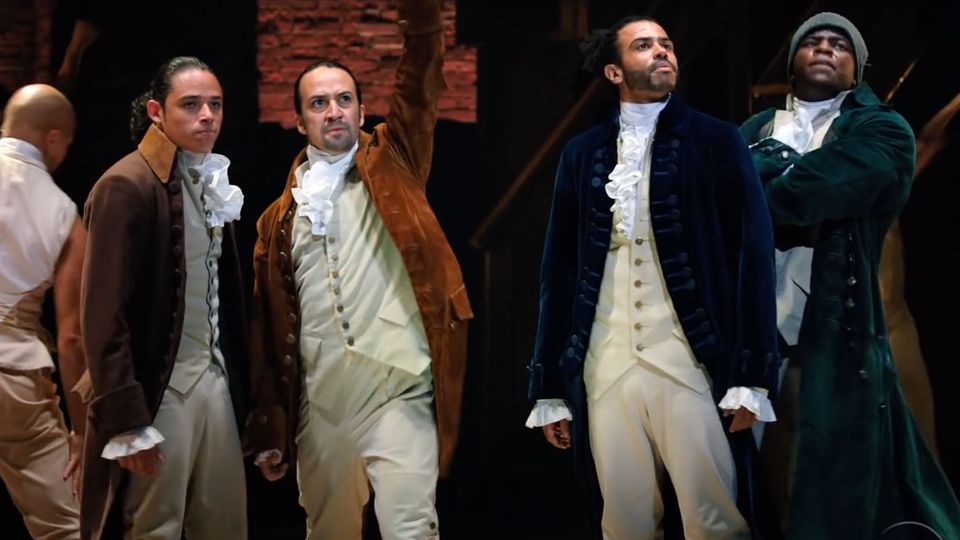 While walking in the snow on a cold, winter day, it’s commonplace for you to leave a trail of footprints, the imprints of the bottom of your boot clearly sticking to the freezing ground. This ‘footprint’—while metaphysical in nature—can be applied to philosophies and patterns of human life around the world, namely a class in which we all take in high school: history. History, for some, is an exciting class that teaches us about the way our ancestors used to live, however this doesn’t apply to everyone in the fact that history can be unfortunately boring. So, when asked whether you’ve watched Hamilton when you’d rather do literally anything else, it can be hard to give the play the credibility it’s received when history just isn’t your thing. Despite this rather large obstacle, Lin Manuel Miranda’s masterpiece of a show has the prowess and the talent to make history enjoyable for everyone; so, yes, there is no doubt that the musical arrangements, the excellent cast, and the hard work put into the show suffices to make it worthy of the praise it gets.

As known with Broadway shows, the musical aspect of the show is just as important as the plot. Hamilton’s plot isn’t necessarily original—the idea for this show has been sitting dormant for hundreds of years.  What Lin Manuel Miranda has chosen to do with it is what makes Hamilton so original and so widely liked by the overall populus. The musical scheme of the show is absolutely phenomenal—mixing R&b with hip hop, a band, and a string quartet to make the most iconic historical soundtrack ever. It takes so much talent and resilience to turn words in a textbook into a live show; from a musical standpoint, Miranda’s lyrical geniusness is unparalleled. The colors and hues of different voices from the excellently orientated cast also contributes to making the show a night to remember. Rich vocals from the Schuyler sisters (Renée Elise Goldsberry, Phillipa Soo, and Jasmine Cephas Jones), Aaron Burr (Leslie Odom Jr.) and Washington (Chris Jackson) help to separate the show from every other hit on broadway. Miranda has also built the show from the ground up, narrating Hamilton’s life in chronological order as well as including historical events in sequential order. He covers the American Revolution, Hamilton’s Federalist Party, the Federalist letters Alexander wrote, Hamilton’s sudden affair, as well as the relationships he had with the people around him: Burr, Angelica, Eliza, Washington, Lafayette, and his son Phillip. He was able to so carefully craft layers upon layers into the soundtrack; there isn’t even a need to watch the show or to see it for yourself as the soundtrack alone can stand by itself and will give you a good synopsis of the show without anything having to pass your eyes. The immersion and merging of modern day musical normalities with the pretense of the 1700s serves as a unique and incomparable fact that Hamilton is surely worth even a minute of your time.

In other facets, the argument that history should be seen as something fun and interesting differentiates with each person. Depending on your cognitive interests, history may perhaps be a subject that bores you to your death. Given the statistics about said subject, that a minority of people seem to have a love for learning it, it can be very difficult to make it enjoyable. And here, Miranda deserves some recognition for selling out show after show about a topic that seems undesirable. The lighting, musical soundtrack, relatable and progressive cast hangs like bait in the eyes of a fisherman; Hamilton was so commercially successful because it checked every box that most broadway shows miss. It was something that we hadn’t ever seen before (merging broadway with history), and on top of that was the phenomenal show experience that drove every watcher to recommend it to their families and friends, making the prices rise astronomically. The nature in which a show is able to turn something that is seen as boring and unnecessary into a sold out show that has tickets backed up for over a year is certainly unmatched.

Although perhaps you’ve retired your snow boots and entered your house to warm up, that footprint will stay. Only when you allow it to slip out of your mind will the snow vaporize and it’ll be gone as soon as the sun wakes. History, however, is a footprint that we cannot forget about, or that we can’t erase. There are many ways to reimagine history and to make it more relevant to the modern day in age, and Hamilton is perfect at blending the Revolutionary era with the likes of a 2000’s soundtrack on someone’s iPhone. Using perfect musicality, focus on the phonetics in the rhythm, beat, vocals, and flow of songs, stage directions, lighting, quality acting, and raw creative talent, Lin Manuel Miranda has crafted a show that crosses all boundaries and attracts all kinds of people. So, maybe Broadway isn’t your thing, but it’s most definitely worth your three hours.